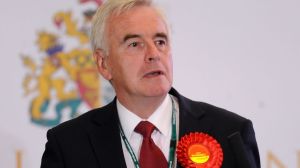 ‘Living within our means’ has become a cliché of late.  George Osborne continues to espouse it as justification for austerity policies,  but Labour’s new shadow Chancellor John McDonnell’s  apparent endorsement of George Osborne’s  ‘ Fiscal Charter’ which commits governments to achieve balanced budgets over a  5 year parliamentary cycle, may seem perplexing;  given his clear commitment to an anti-austerity  economics

McDonnell’s immediate problem has been the shadow left by Ed Miliband’s front bench and its capitulation to George Osborne’s ‘spin’ offensive   -particularly the charge that it was Labour’s ‘overspending’ that  was  a major  reason for the extent of the 2008 crash. But there’s little evidence that there was any  overspending.  On average, despite what Osborne wants us to believe, Labour spent less and borrowed less   than the Tories did before the downturn set in   –  and for 2007-8 the current deficit of was under 1% of  GDP    There’s a huge difference between McDonnell and Osborne of course.  Labour insists that borrowing for public investment is excluded from any fiscal restrictions, as this will form the basis of its alternative programme for growth.

Meanwhile, ‘living within our means’  continues  to  be impossible for many people, including many of those in work, with wages barely reaching their pre-down levels and easily available credit being used to fill the gap.  As a result   average household debt  (excluding mortgages)  grew  by 9% in 2014 and is set  to reach £10 000 by  the end of 2016 (Guardian  23/03/15) –a  significant factor behind  the Bank of England’s   delay  in raising  interest  rates.

Despite McDonnell’s caution, it’s nonsense to apply imaginary household budgeting habits to government   fiscal policy and indeed until the emergence of neo-liberal  economics as the new orthodoxy, few economists would consider trying to do this. Equally ridiculous have been the accusations that McDonnell’s and Jeremy Corbyn’s plans for a ‘People’s Quantitative Easing’ will lead to the hyperinflation of   Zimbabwe or the Weimar Republic (!) Osborne himself, accepting that in times of recession, low interest rates and near zero inflation, governments can increase the nation’s money supply to promote growth and renew activity (1) injected £325 billion worth of new funds (equivalent to over a third of the national debt)  into the banking system after the crash in the vein hope that it would be converted into loans to businesses and consumers.

With an increasing risk of another downturn in the months ahead –making  it even less likely that  either the national debt to income ratio will  be reduced or  the budget deficit cleared by the end of the Parliament,   a  less constrained  Labour economic  strategy will surely be able to emerge

2 thoughts on “‘Living within our means’”