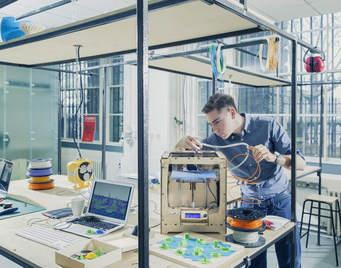 You could be forgiven for not realising last week was ‘Apprenticeship Week’ – an annual event enabling the apprenticeship industry to promote good practice and celebrate the diversity of opportunities available, the government is also launching a £2 million advertising campaign through TV and social media.

Make no mistake there are some very good apprenticeships and a significant number of young people have benefited from not following the conventional Higher Education route into employment. In particular it’s the expansion of Higher-Level apprenticeships (some of which involve university attendance) that has attracted attention of late. Last year saw over 30 000 new starts on Level 5 and 6 (graduate level) schemes, which include standards for teachers and legal professionals. Higher Level starts now make up over 1 in 8 of the total.

New standards, developed by employers, now operate for over 400 routes with apprentices guaranteed, at least in theory, much better opportunities for off-the-job training. The number of starts on the new standards, phased in from 2014, increased by over 60,000 between 2016/17 and 2017/18, representing 25% of the total. As is the case elsewhere in Europe, an employer ‘levy’ now provides most of the finance.

Yet the apprenticeship initiative, beefed up by David Cameron in 2014, with a promise that 3 million more would be available by 2020,  has continued to tread water. Despite the increase at Higher Level, the total number of starts has fallen recently. In 2017/18 there were 375 000 new apprenticeships, down from 495,000 the year before and 509,000 the year previously.

It’s true that the proportion of young people starting schemes has grown. 28% are started by under 19-year-olds, with another 30% by those between 19-24 (government has clamped down on a process whereby some employers reregistered existing employees as ‘apprentices’ to gain funding), but a situation where nearly half the starts are by over 25’s means that apprenticeships are still not providing a proper alternative pathway to university for young people (over 400 000 school leavers apply for HE annually).

There is also concern about the level apprenticeships have been offered – Cameron promised they would develop ‘high skills’ and commissioned entrepreneur Doug Richards to improve them. Yet nearly half of apprenticeship starts are intermediate standard (GCSE equivalent, a level that most young people have already reached) while Advanced Level apprenticeships have not expanded in the way that was hoped. The number of 16-year olds enrolling is a fraction of those that start A-level courses.

Finally, 30% of apprenticeship starts are in the business sector and 25% in health and social care – which helps to explain why there are nearly as many female apprentices as male. Apprenticeships have been considered a key part of the government’s ‘industrial strategy’ designed to rebalance the economy, yet only 15% of starts are in Engineering and Manufacturing Technologies.

Recent falls in numbers have coincided with the introduction of the compulsory levy on large employers, but it’s difficult to see how this could be a cause – the opposite might be assumed?  Schools and colleges have also been criticised for not promoting apprenticeships to their students – but schools can’t be expected to compensate for cuts in careers advice and in many parts of the country employers are either not offering apprenticeships or are reluctant to employ school leavers. Low levels of pay are also cited, but they are higher than in some other countries.

Comparisons can be made with successful European systems like Germany. But there, apprenticeships are part of a broader ‘social partnership’ that still exists between employers, local and national state institutions and trade unions, through which apprenticeship requirements are planned collectively and where completing an apprenticeship guarantees progression to employment – this isn’t guaranteed on many British programmes. In contrast UK, apprenticeships largely run on a ‘free market’ basis, where rather than being required, or at least expected to, employers have to be persuaded to opt in.

Most significantly, the apprenticeship problem is really a jobs problem. Apprenticeships  were  previously associated with manufacturing. The employment structure of the post-war period, the heyday of apprenticeships was very different to the one that exists now – where the need for generic, rather than specific technical skills is now emphasised and workers may expect to have to move in and out of different types of employment during their lives.

But the ‘deindustrialisation’ of Britain, has not, for many people at least, given way to employment in a highly skilled service sector or a ‘knowledge economy’. The UK has also been particularly susceptible to the disappearance of ‘middle-jobs’-particularly many technician level jobs that apprenticeships have been associated with.

Lastly, the huge expansion of universities has resulted in a surplus of graduates, many occupying jobs that were once filled by non-graduates or by training up junior staff. Why take on an apprentice if you can recruit an oven ready graduate? The problem with apprenticeships is that employers, don’t need as many of them as government and policy wonks like to think.

4 thoughts on “‘Apprenticeship Week’ but not too much to celebrate?”