As the chart shows, recent years have seen an increase in the number of children 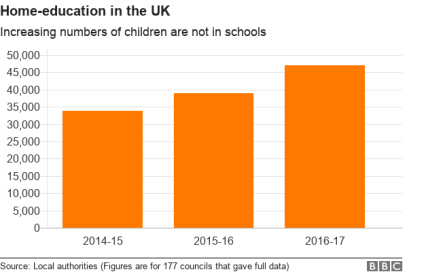 being educated outside of the school system – 48,000 In 2016-17, up from about 34,000 in 2014-15. Section 7 of the Education Act 1996 provides that: “The parent of every child of compulsory school age shall cause him to receive efficient full-time education suitable – (a) to his age, ability and aptitude, and (b) to any special educational needs he may have – either by regular attendance at school or otherwise.”

Local Authorities have a duty under the same act (Section 436A) to identify, as far as is possible, children who are not receiving a suitable education otherwise than being at school (for example at home, privately, or in alternative provision) but there are no clear guidelines on this and besides, few have the resources to do this properly.

The reasons why more children are being registered as home educated are also changing. Under pressure to meet exam and attendance targets schools are excluding and effectively removing more and more children from their rolls, for a range of dubious reason, ‘bad behaviour’ being just one of them. According to Department for Education statistics, just under 4,500 pupils with statutory rights to special needs support were awaiting suitable provision or being home-schooled at the start of the year (Guardian 23/10/18). There is no doubt either that more parents now opt to home-school their children to avoid bullying and exam stress.

But since the 1970s a relatively small but vociferous number of parents have continued to educate their children at home. This was often because schools were considered oppressive or stifled creativity and free expression. Criticisms that at that time were also taken up by the even smaller ‘free school’ movement – not to be confused with the current version and supported by those influenced by the ‘libertarian’ ideas of the time, rather than Tory free-marketism and ‘parental choice’.

Mainstream socialists tended to ignore (even oppose) home schooling because the creation of comprehensive schools was considered a major political gain within the state system and alongside more progressive teaching methods, believed to provide real opportunities for a fairer more rewarding education, and apart from some in the green movement there continues to be little support or interest in it.

One of the major criticisms has been that education should be a social activity and that children learning at home are denied valuable social interaction. This isn’t entirely true as home educators have often collaborated, made use of group tutoring and more recently still, been able to use online networking. Neither is there any clear evidence of young people who have been educated at home during their earlier years, failing to adapt to the collective environment of college and university.

What is  the future for  home education? Despite its increase, the number of home-educated children is still comparatively small. One danger is that as a ‘good education’ is increasingly seen as one that just  produces top grades in exams and improves access to prestigious universities, the number of on-line study ‘platforms’ that focus on examination content, but also examination technique, and can be used at home, without a teacher will also multiply. It’s also the case that those parents that can afford to, even many that can’t, now increasingly employ personal tutors to visit their homes.

Both developments might help to tilt the balance away from what happens in the classroom, but they don’t signal the end of the school system. Placement in the university system and therefore, in the labour market, will continue to depend on the active input of (and the reputation of elite) schools.

‘Marxist’ writers have long argued, schools play an important role in the reproduction of inequalities, but also replicate the authority structures of the workplace – particularly the factory. In the context of the 21st century employment changes, when employer representatives lambast educational institutions for not promoting modern ‘soft skills’ many of these theories should now be considered a little ‘overcooked’.

But though the number of employees ‘working at home’ continues to increase, especially amongst  the highly educated, it will probably never become universal because of the importance of the workplace and the proximity of ‘the boss’ for securing ‘authority’,  so the significance of the school as an agent of social control, should never be discounted.