There is no sign of any pick up in the labour market. Though unemployment , as measured by the broader Labour Force Survey method has fallen by 8000, this is much lower than City analysts had predicted and still leaves joblessness at 7.8%. More significantly, the quarterly figures from the Office for National Statistics  show the ‘Claimant Count’ – those receiving  the Job Seekers Allowance (JSA)  – going up by 2300 to 1.466 million,  the first increase since January.  So is the number of people unemployed for more than 12 months. Now standing at 800.000.

The number of people in full- time employment went up by 121,000 in the three month period from April 2010, but the number of people in part-time employment was up by 166,000. With over 1.2 million people being forced to take  part-time work because they cannot find a full-time job and increasing numbers having given up looking for work completely – becoming part of the 9 million people recorded as ‘economically inactive’ – the ‘real’ rate of unemployment is already above the 10% predicted when the planned  public spending cuts set in. 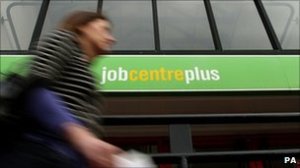 Youth unemployment continues to remain much higher than for the population generally and will surely be higher still when this summer’s school, college and university leavers are included.  After a small fall in the previous quarter,  unemployment for 18-24 year olds increased by 16 000 to 728 000 while 60% of 16-17 year olds not in full-time education are either recorded as unemployed or economically inactive. If some of these are officially classed as  ‘students’ because they have signed up for part-time courses in FE colleges, it still points to  a NEETs population of over 10% for 16-17 year olds and 1 in 6  for those 18-24. Over 25% of 18-24 year olds recorded as unemployed  have been so for over a year.