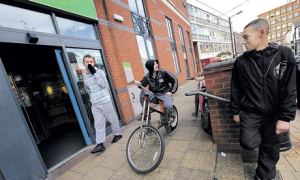 In line with international guidelines, people in full-time education are included in the youth unemployment estimates if they are looking for employment and are available to work.  Excluding people in full-time education, there were 709,000 unemployed 16 to 24 year olds in the three months to July 2011, up 91,000 from the three months to April 2011.  Equally concerning, the number of young people not in full-time education but considered ‘economically inactive’ is  also up –  now  just under 800 000. Though many people in this category are not able to work, it includes those who have  ‘given up’ looking  for employment. With 25% of  economically inactive people as a whole saying  they ‘want a job’ – real levels of unemployment are much higher than official rates. This is particularly true with young people.

Publication of the unemployment figures have coincided with the announcement of plans for strike action in defence of pensions by the public sector unions.  The ONS figures (http://www.ons.gov.uk/ons/index.html)  show the largest ever recorded fall in the number of those in public sector jobs (employment in the public sector fell by 111 000 between March and June) and the number of people working part-time because they can’t find a full-time job is at its highest ever – 1.28 million.  There has also been a 40%  increase in the number of temporary workers unable to find a permanent job since the recession began. (http://www.ippr.org/uploadedFiles/pressreleases/Part-time%20and%20temporary%20work%20technical%20briefing.pdf)

These labour market changes mean that public sector unions need to build careful alliances and link their pension demands to broader social objectives so as to maintain mass support for their actions. Nowhere is this more so than in education where, as young people pile up qualifications but are unable to secure the sort of   employment they deserve;  teachers and their organisations must help promote alternatives.

3 thoughts on “As youth unemployment rises towards 1 million: new challenges for educators”