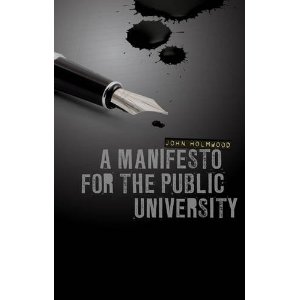 ‘The Assault on Universities, A Manifesto for Resistance’  Michael Bailey  and Des Freedman (eds) (2011) London, Pluto

As Andrew McGettigan asked on his Critical Education blog at the end of 2011, noting

‘ the government’s strategy for higher education…is wide-ranging: dispersed, piecemeal and already underway in order to rush through change by the end of this parliament in 2015.’ In the haste, he says, some things like loans have been botched, ‘but that doesn’t necessarily aid those campaigning against the reforms’.

He predicts, ‘ primary legislation in 2012 on universities… [probably] as a Higher Education Bill.’ Key measures here will be: ‘Changes to degree awarding powers and the restrictions on the use of the “university” title including the possibility of allowing bodies that do no teaching, such as Pearson plc, to award degrees. Introducing a single regulatory framework to create a “level playing field” for private and for-profit providers to compete against the established HE institutions. Allowing universities to change their corporate form more easily so as to be better able to access private finance. This will involve legislation governing the charitable status of public universities. This is most likely to allow ex-Polytechnics which are “higher education corporations” to change to forms, such as “company limited by guarantee”, that would allow them to issue bonds’

As he concludes, These measures ‘extend the new market in undergraduate recruitment by allowing more operations, while tight controls on the overall numbers of students are to be retained. More outfits fighting for the same students.’ Adding, ‘Any campaigning in 2012 has to be aware of these points of leverage. It will be a protracted passage through parliament but it is important to take these issues to a general public – and they lack the headline impact of fees.

Two manifestos, also published at the end of 2011, are perhaps symptomatic of academic resistance to the Coalition Assault on Universities.

John Holmwood seeks reasoned assent to the Campaign for a Public University in seven chapters following his own introduction. With erudition and elegance his chapter draws upon the legacy of John Dewey in the development of university systems in the USA and UK to reassert ‘the principles associated with the development of mass higher education’ (p.19), ‘a university at the service of the public’ (p.25).

Michael Burawoy’s chapter, consistent with his advocacy of public sociology, also views ‘the university as a critical public sphere… organising discussion about the direction of society’ (pp.40-1). Nicola Miller and John Sabapathy similarly seek ‘a new cultural contract for universities’ (p.53) but their vision of ‘stimulating communities in which our most promising school-leavers can become thoughtful and engaged adults’ (p.55) rather follows the ‘single model of the university… in imitation of the richest universities in the West’ that Burawoy urged abandoning (p.41).

As the lone scientist in both these collections, Philip Moriarty on ‘Science as a Public Good’ opposes HEFCE and RCUK’s collusion with university management in privatising disinterested academic science by turning ‘business-facing’ universities into ‘business-led’ ones (p.58) and supports UCU’s 17,500-strong petition against the REF. Desmond King likewise opposes ESRC’s ‘shift toward funding and producing government-friendly research’ (p.76), instanced by ‘The Religion of Inequality’ described by Stephen McKay and Karen Rolinson: ‘policies aimed, not at the abatement of class differentials but at ensuring their continuation’ (p.91).

Diane Reay’s is however the only chapter to answer McKay and Rolinson’s question why the widening access in which academics invested so many illusions had such little success by showing how ‘the historic intertwining of the private schools with the elite universities… reproduces inequality’ (p.119). She therefore seeks changes in ‘The university league: from premier to third division’ (p.116), ‘disrupting notions of “the best”’ (p.120) and dispelling ‘the myth of social mobility’ (p.125). As Camila Vallejo, the Chilean student leader, has said, ‘We want to improve the educational system but not this one. We must move towards a more inclusive, truly democratic and just system.’

Instead of a manifesto to this end, Holmwood’s reasoned arguments leave Sir Steve Smith the last word to excuse the abject prostration of UUK under his Presidency as securing the best possible deal in the circumstances. However, Smith’s concluding question ‘how would those who disagree with the policies adopted by UUK have achieved those objectives?’ (p.142) is not answered by Holmwood’s contributors.

By contrast, Michael Bailey and Des Freedman answer this question in 16 tight chapters divided into five sections beginning with ‘a clear vision of what the university should be: a public service, a social entitlement, a space for critical thinking and a place of discovery’ (p.10). Confronting ‘current challenges’ with ‘future visions’, their contributors draw upon student resistance and critical pedagogy to revisit ‘Student Revolts Then and Now’ with John Rees, putting what Henry Giroux calls ‘the Swindle of the Corporate University’ in a global context to ‘Re-imagine the Public Good’ (Jon Nixon).

Apart from these three, the book’s 13 other chapters are by younger lecturers and students cohered around Radical Goldsmiths and associated ideological and political currents. Yet they also share illusions in higher education’s role in ‘turning out skilled labour for British capital’ (p.35) while ignoring the mass of students for whom HE – along with the schools and FE – functions increasingly as a system of social control.

Nevertheless, their two page Manifesto advances 18 demands that Vallejo would approve but less to win the public assent that Holmwood seeks than ‘to build a counter-culture within the English university, a culture and a life which embeds a counter-rationality to neoliberalism’ (p.44). However, the grounds on which to do this will be reduced as Arts and Humanities are left to overseas students and others seriously rich enough to pay for them at elite and surviving campus universities since government has finally abolished ‘the stagnant and disabling traces of the “two cultures”’, as Miller and Sabapathy describe them (in Holmwood p.49), by funding only STEM subjects.

The majority of HEIs will thus be left jockeying for position in the manipulated market while hopes of reigniting last year’s ‘Springtime’ of student resistance have collapsed into intermittent campaigning for lecturers’ pensions – hardly a cause to excite the young! – by public sector trades unions typically and easily divided by government. Although at least one VC has confided that he is waiting for the whole shambles to collapse in two or three years’ time and David Blanchflower, the Bank of England’s Monetary Policy Committee member has called for 100,000 more university places on the grounds that ‘You’re getting people into university and getting them off the streets’ (Times Higher 09/11/11), the Labour Party, along with NUS, now supports a graduate tax of £6000. So there are few signs of ‘the university community… developing the collective conscience’ Michael Burroway advocates (p.33).

The prospects are therefore not good now that, as John Holmwood states, ‘It is systematic government policy… to dismantle fifty years of educational policy that sought to establish education as a social right’ (p.19). But the recent emphasis upon educationeducationeducation led to a paradoxical result in the very real phenomenon of what is incorrectly called ‘dumbing down’. This is not coincidental since education substituted itself for economic reform and tried to accommodate society to the free market, proffering illusions of upward mobility through deflated and supposedly vocational qualifications reduced towards tests of competence.

Now education at all levels returns to reinforcing more or less expensively acquired cultural capital demonstrated in the tests of literary ability that ensure entry to ‘real universities’. This reinforces the Gove-Willetts’ view that too many working-class kids have gone to ‘unreal universities’ and should return to FE apprenticeships where they belong, a view shared by many academics in ‘real unis’ and by those clinging to their research careers. It forgets that most of these students are young women and that most employers don’t require apprentices.

Meanwhile, growing numbers of young people no longer see education as a way forward to productive and meaningful lives. Instead, formal learning (and teaching) becomes performance and pretence.

Confronting this social and educational crisis through critique risks being ignored, as John Walton says in Bailey and Freedman (p.22) but unless counter-culture can find a purchase in struggle against the predictable closures and mergers that will collapse many universities into local e-training hubs it will remain isolated. Then Holmwood’s wider appeal may afford a more pragmatic way forward. Both approaches demand the ‘critical and reinvigorated vision of the social purpose of university teaching as a tool for expanding and sustaining public knowledge’ that Nick Couldry calls for in Bailey and Freedman (p.44) in a chapter appropriately entitled ‘Fighting for the University’s Life’. But this fight has to extend beyond the ‘real universities’ to which contributors to both manifestos are confined.

One thought on “Two Manifestos for the fight against fees”