The graduate forced to work at Poundland for free has won an appeal against the Coalition’s ‘workfare’ plans.  Cait Reilly, 24, from Birmingham, had argued that being made to work in the discount shop for nothing while she looked for a permanent job was illegal. The High Court ruling should mean anyone loosing jobseeker’s allowance for not complying with these sorts of  schemes could demand the money back. 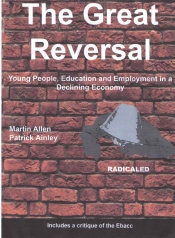 Excerpt  from the  Great Reversal. Young People, Education and Employment in a Declining Economy

‘Workfare’ comes to the UK

‘As well as ‘more funding for apprenticeships’, including the subsequently announced so-called ‘professional apprenticeships’ (whatever they are – apart from another way to cut back on applications to higher education), the Coalition also announced that 250,000 young people would be provided with unpaid work experience placements lasting up to eight weeks, adding that they would lose their benefits if they ‘volunteered’ and then did not complete it. It is also the case that anyone  on a ‘work-placement’ scheme is no longer officially  counted  as ‘unemployed’ even if they continue to receive benefits (Guardian 16/01/12).

This lead to allegations about ‘slave labour’ and to one ‘trainee’, Cait Reilly, a University of Birmingham geology graduate, seeking (though failing) to get a judicial review against the scheme after she was required to stack shelves without pay in the budget store Poundland.  She appealed on the grounds that it had nothing to do with her aim of finding work in the museum sector and that by doing the work of paid employees the scheme was potentially increasing unemployment. The 22-year-old said she had been told by Job Centre officials that the placement was mandatory and that she had to give up an existing unpaid museum placement to complete it.

While Poundland defended the placements as providing valuable work experience, the fallout from what opponents labelled a British version of US ‘Workfare’ was that many well-known high street companies distanced themselves from the scheme. Aware of the adverse publicity, Tesco, for example, backtracked still further, promising to pay participants and offering a job if a placement was successful (Guardian 22/02/12). Department of Work and Pensions officials also gave assurances that the scheme would be used in a supportive rather than a coercive manner and would be ‘voluntary’………’