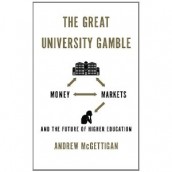 These two books are essential reading for everyone involved in or concerned about the future of English higher education.

Andrew McGettigan’s is the book he wished he had when he found himself as confused as everyone else in 2010 as Middlesex University sacrificed its philosophy department for a Far Eastern expansion that he now takes as a prime case of overseas outsourcing. He became, as he explains in introduction, ‘a freelance “policy wonk”’, writing largely for the blogosphere on ‘the technical side of funding, recruitment markets, bond issues, joint ventures and… the potential buyouts of established universities by private finance.’ ‘This tour through the backrooms of higher education policy… aims to spare you that chore.’ Such a role is becoming more necessary to inform Campaigns like the CPU.

Although ‘pitched for a general readership’, this specialized field has its own jargon that needs to be interpreted. It is also a bizarre world, operating 30 years into the future, when the government expects two thirds of the current crop of student loans to be recovered – abandoning the other third! (£3.3b of an annual outlay projected by Willetts for 2014/15 at £14b of which £10b is loans for fees and maintenance.) This is ‘a huge gamble with England’s universities… not a controlled experiment.’ The results are nevertheless predictable: ‘we should expect a diminution in the number of universities in England, whether through merger or collapse, and prospective students are likely to soon face less choice as to where and what they study.’ (p.6)

English higher education is ‘on the cusp of a transformation’ akin to the country’s football 20 years ago ‘when the breakaway Premier League and Sky TV money combined with the regulatory arbitrage of corporate restructuring to reroute the financial circuits of the game’ and ‘a new elite cemented its position… while the majority of institutions will be left to scrap in a new market swamped with cheap degree providers’ (p.ix).

So what is the nature of the gamble in which universities and colleges are the chips? ‘The gamble is that the creative destruction of mass higher education as currently provided will be worth it in the longer run.’ (p.185) New private providers and established charitable institutions changing their corporate forms could ‘extract value’ (i.e. make a profit) from even larger numbers of trainees and ‘students’ if the associated risks could be managed. Tim Leunig, currently seconded from LSE to advise Michael Gove, is cross-referencing UCAS records with data the Student Loans Company (sold off or not) receives from HM Revenue and Customs, so that different degrees could be matched for cost against long-run earnings. On the other hand, ‘If student numbers decline so that fewer loans are issued there would be a substantial saving’ (p.171).

For True Believers in ‘choice and competition’ like Willetts and Gove, whichever or whatever result is the Will of the Market. Markets though have to be rigged (up)! Having explained ‘The Basics of HE Funding’(!), McGettigan traces the stages by which this was achieved from ‘Marketisation’ under New Labour, through ‘Privatisation’ with the imminent entry of (many more) companies remunerating the investments of their shareholders, alongside banks, hedge funds and bond holders etc., to projected ‘Financialisation’, defined as ‘how a public good is placed within a system of accounts via the novel use of data, accounting techniques and political disciplining’ (p.175). The end result is a rabid extension of what has been called the post-welfare, ‘Contracting State’ in which responsibility for delivery is contracted out to agents (schools, colleges and universities, in this case) run to targets, while power to set and inspect the targets contracts to the centre. Simultaneously, a new mixed economy, introduced with the privatization of nationalized industry in the 1980s, mingles the semi-privatised state sector of former public services indiscriminately with a state-subsidised private sector.

What is to be done about this? ‘In the short-term, political activity and organization needs to be reactive, preventing the unfettered advent of any primary legislation’ (since the whole White Paper has been winged through on the hoof). ‘Any worthwhile alternative also involves a longer range struggle: one that makes the case and fights for mass higher education not as “value for money” but as a quality commitment to the population defined as whoever can benefit. It argues for a breadth of provision both in terms of subjects offered but also in terms of the content of those subjects, contesting the demand-led homogenization of education and maintaining critical and advanced content.’ Pragmatic responses will not be enough! ‘We must seek more participative provision, structures and institutions.’ (pp.186-7)

Barely mentioned in the White Paper, academics, squeezed between the demands of student-consumers and pressures from management, have ‘failed to properly defend their profession… Collegiality has been displaced by corporatism.’ Worse, universities and colleges face a loss of public support ‘in so far as commercial imperatives and market positioning are seen to dovetail with the government’s agenda of polarization, stratification and the sorting of individuals.’ The ‘endemic resentments that befoul education’ threaten to erupt under these pressures. (ibid)

Like Brown and Carasso, McGettigan looks to the university governance structures proposed by von Prondzynski in Scotland for some safeguard against the depredations they delineate. Unlike them, he does not cover research, which is already playing a large part as some universities serve ‘the knowledge economy’ through growing medico-industrial complexes. Helen Carasso has a chapter on research funding in her book with Roger Brown, starting from the 1918 Haldane principle that public funds for research should be allocated on the basis of academic and not political criteria to chronicle demands for selectivity since. This includes exhaustive summaries of the five RAEs and current REF, which goes beyond political to economic interference and is a good illustration of the book’s thesis that – like GP commissioning in the NHS – ‘present university governance arrangements will not be strong enough to cope with increased market competition and greater commercial involvement in higher education.’ (p.162)

Carasso notes ‘the inevitable concomitant of [research] selectivity, concentration’ (p.64), given its greater symbolic than financial importance, ‘…has gone far wider than research’ (p.70) to signal quality. This is where Brown comes into his own as former-Chief Executive of the Higher Education Quality Council where he proposed an HE Audit Commission that he rehearses here. Like the Comptroller and Auditor General, this would be rendered legally, financially and operationally independent from government by being directly accountable to Parliament. Despite the negative effects of marketization upon diversity and equity – if not efficiency (but to what purpose?) – detailed in chapter seven, as well as evidence of declines in educational quality with grade inflation, plagiarism and changes in the curriculum (so that nearly all subjects nowadays resemble or include Business Studies), plus ‘dysfunctional expenditure’ (the university as shopping mall as in the USA), listed in chapter eight, ‘it hardly suits either HEFCE or UUK to question quality openly’ (n.5, p.191). This is what Brown and Carasso do in their final chapter drawing ‘Lessons from marketisation’.

Here they advance a compromise solution that seeks to wrest some gains from market-based policies, whilst minimizing their detriments. ‘The basic message is that some competition for students and research income leads to improvements in efficiency and responsiveness. But if this is carried too far it leads… to waste and inefficiency’ (p.171). Three pre-requisites are required to prevent lurching towards this: adequate overall funding, institutional and sectoral independence, safeguarded paradoxically by strong external regulation of quality (as above).

Brown and Carasso is an essential reference to the series of events listed in the three page chronology appended to their introduction. Starting with withdrawal of remaining fee subsidies for overseas students from 1980, it culminates in the 2011 White Paper and its subsequent non-legislative implementation. Developments in Scotland, Wales and Northern Ireland are also summarized. If not ‘the primer… providing a one-stop resource for interpreting management and governor decisions’ that McGettigan aims to provide (p.viii), Brown and Carasso is a no less essential history. They contribute to the ‘proper public debate’ where ‘new ideas and resistance will burgeon’ (p.188) that McGettigan looks to in the last words of his book. Both books ‘might appear bleak’ but they are ‘animated by optimism’.