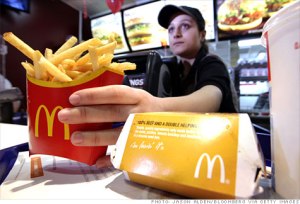 The latest labour market statistics from the Office for National Statistics for May to September   (www.ons.gov.uk/ons/rel/lms/labour-market-statistics/september-2014/statistical-bulletin.html)  show significant falls in unemployment amongst 16-24 years – down to 747 000 (16.6%) from 960 000 (12%)  a year ago and from 853 000 over the last quarter. Amongst  those between 18-24 year who are not in full-time education, which is a more reliable indicator, as the above  figures include full-time students also looking for work, an additional 165 000 have entered employment of some kind.

Though it’s still twice the rate of unemployment as a whole, the dip in youth joblessness is to be welcomed,  yet in the post-crash labour market, the type of employment available is as increasingly significant as the availability of employment in general. Of those 16-24 year olds not in full-time education for example, only around 15% are currently participating in apprenticeships.

As the ONS  data shows, almost all of the increase  in  70 000 overall increase in employment in the last quarter can be explained by the increase in part-time work; while nearly 400 000 of the 1.12 million more jobs between June 13 and June 14 have been self-employed –though this has mostly involved older workers.  In addition  the increase in the total number of jobs has been heavily concentrated in sectors where jobs are low skill and low paid.

Recent evidence from the Institute of Fiscal Studies shows that it is the income of young people between 22-30 that have suffered most since 2008 (www.ifs.org.uk/uploads/publications/comms/r96.pdf), falling by 13% compared with 6% for those 31-59. The ONS reports that of those young people under 25 who are not in full-time education in work, 19% work in ‘elementary’ occupations and a further 17% in ‘customer service’ occupations and a further 12% in ‘caring and leisure’ –all low paid sectors of the economy. (http://www.ons.gov.uk/ons/dcp171776_355123.pdf). According to the TUC, the number of young people trapped in low-paid, low-skill jobs, has increased markedly over the past 20 years. The report blames the huge rise in low-skilled work on the collapse of middle-income jobs, such as administrative and plant and manufacturing jobs in recent decades.

Young women in particular are getting a lower wage return on their qualifications. Despite being better qualified than young men (www.tuc.org.uk/economic-issues/labour-market/equality-issues/gender-equality/three-times-more-young-women-are-doing), just one in a hundred young women worked in skilled trades in 2011, compared to one in five young men. And four times more young women (21 per cent) worked in personal service occupations like hairdressing, leisure and the travel industry in 2011 than young men (5 per cent). More than one in five women earning less than £7.44 per hour were educated to degree level (www.fawcettsociety.org.uk).

Traditionally , at least for many people, employment used to lead to income progression after a training period has been completed. Significantly, the  IFS data shows that the income the under 30s is not rising in the way that it has traditionally done so –reflecting the increased number of young people in ‘dead end’ jobs where there are few prospects of progression or promotion.

Increasing spending on better education and training, is important but in itself is not enough to change this.  The UK is already well on the way to becoming a ‘graduate economy’ but almost half of those leaving university do not go into graduate jobs, while the slow growth in apprenticeships  is largely because most employers don’t  really need them. Improvements to young people’s employment opportunities will only really take place through radical changes to the economy and to the way the labour market works.