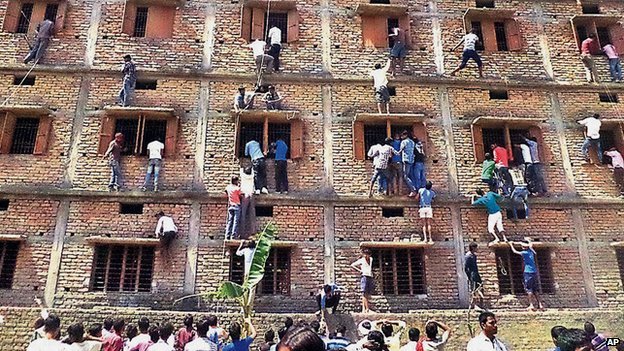 This astonishing picture from the Indian state of Bihar, published by  several news agencies (also as part of a Daily Telegraph video report), provides a chilling example of the faltering relationship between educational credentials and the labour market.  Some were apparently trying to hand in answer sheets folded into paper planes to the 12th grade pupils sitting their exams

Ironically it’s in the faster growing economies where ‘education fever’ is most extreme.  Last year, over 2,000 Chinese students were caught cheating during a national exam, using elaborate high-tech gear to do so, with Chinese state television reporting that invigilators detected abnormal radio signals from an illegal frequency during national licensing tests for pharmacists in Shaanxi province.

In South Korea where university tuition fees are the third most expensive out of all the OECD countries, suicide is the largest cause of death among young people aged 15-24 years. Like China, UK policy makers have looked at South Korea for inspiration in the push to raise standards.

In the UK, thank goodness, responses are relatively mild  in comparison,   although a third of parents move house to get into a ‘good’ school catchment area and up to one in four now rely on tutors. Appealing against exam outcomes is now something quite normal, with the number of inquiries questioning GCSE and A-level grades  up by 48% to 450,500 last year, according to exam watchdog Ofqual.

But in the 21st global economy, with education now primarily about ‘passing’ rather than ‘learning’,  even piling up exams isn’t enough to help young people move on in life and as a result, education, unless it is radically changed and given a new meaning,  will increasingly experience a ‘legitimacy’ crisis. Becoming like trying to climb up a downwards escalator, as qualifications become devalued,  you have to climb further and faster just to stand still. Unfortunately  the  Bilar parents have taken climbing to a new level.

2 thoughts on “Parents climb walls to help their children cheat.”