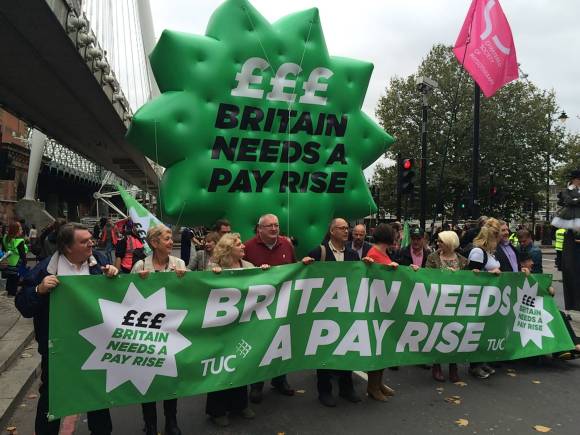 Latest figures from the ONS, show the employment rate (the proportion of people aged from 16 to 64 who were in work) at 74.6%, the joint highest since records began in 1971. The unemployment rate has also fallen to 4.7%, down from 5.1% for a year earlier. It has not been lower since June to August 1975. Yet in 1975, it was a very different economy with a very different labour market. The UK was the 5th or 6th biggest manufacturer in terms of total output (it’s now 9th) with 1 in 5 still working in the sector (it’s now less than 10%). Harold Wilson was prime minister and a referendum on EU membership recorded two-thirds support.

Then, some 17 million people (approaching  40% of the workforce) belonged to trade unions compared to around 6 million today. As Andrew Glynn and Bob Sutcliffe described in their influential Workers, Capitalism and the Profits Squeeze – organised labour had been able to use its power to steadily increase its returns at the expense of profits. Capital could only resolve this by attempting to increase prices but could not fully win back what it had lost in wage negotiations because of increased international competition. Nevertheless in 1975, inflation reached a post-war peak of more than 25%

Today the situation could not be more different.  After approaching 65% of national income in the mid-1970s, the proportion of national income returns to labour is down to 55%. Alongside the fall in the wage share, there has been a general rise in the inequality of earnings. The most highly paid have taken an ever larger share.  The average full time person in work would be paid more than £7,000 more than they actually are if wages had kept up with economic growth and if the best paid had not increased their wages at the expense of everyone else.

Even if economic growth may have climbed to 2% per annum, this has been the result of an increase in size of the labour force not increases in productivity, with firms increasingly dependent on constant supplies of foreign labour. As a result per capita (per worker) income has barely increased at all. Meanwhile, the profit share (operating surpluses as a percentage of national income) rose from 24 % in 1980 to 28% in 2011.

The declining fortunes for workers is not simply a reflection of repressive trade union legislation. It’s also the result of significant structural changes within the labour market -the continued decline of traditional manual employment, where trade unions were always strongest, but also the ‘hollowing out’ of many ‘middle’ occupations. These have been replaced by huge increases in low-paid work at the bottom end of the service sector, the growth of casualised labour (‘zero-hours’ employment is approaching 1 million) and of bogus ‘self-employment’ –all areas where it is extremely difficult, though not impossible,  for trade unions to organise.

Whereas in the 1970s Labour politicians and many trade union bosses tried to sell ‘incomes policies’ as a way of controlling wage increases/inflation, today’s ‘precarious’ the labour market imposes its own discipline and as a result, as well calling for the repeal of anti-trade union laws, campaigners have demanded new types of state policies, for example, an increased minimum or ‘living’ wage and an end to ‘zero hours’. Demands for a Universal Basic or a ‘Citizens’ income to gain ground, which though accepted by Greens, continues to be largely ignored by Labour and union  leaders.

One thought on “From a profits squeeze to a wages grab”