While opposition to Tory cuts continues, Labour has  huge support for its commitment to restoring school budgets. At the same time however, the Party leadership also promises to ‘balance the books’ and maintain ‘fiscal credibility 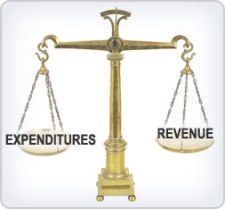 ’.  By this it means that over the course of a five-year Parliament, current  (day to day)  expenditure  will be largely funded by  taxation revenue generated by more sustained economic growth, and a  fairer, more egalitarian tax system. (Labour says it will still borrow for ‘investment’ – channelling this through a National Investment Bank.)

So far, so good? Not really. An obsession with ‘fiscal credibility’ is a continuation of  current neo-liberal orthodoxy. (though this has not prevented Tory governments from injecting £400 billion electronic money into the banking system through ‘quantitative easing’!  – and neo-liberals don’t seem to worry about escalating private debt either). Governments are not like individual households in the way that they have to manage expenditure – as governments create and manage their own currency (having left the ‘gold standard’ nearly a hundred years ago). Therefore they don’t need to rely on loans or taxation receipts to get by. (Though they should  levy high taxes on those who can afford to pay.)

This is not to say that there can be endless spending. A government committed to increasing economic activity through monetary expansion would want to be aware of a potential increase in inflation as the economy eventually reached full capacity, as well as the balance of payments implications. But decisions about spending are political rather than economic and there is never really a situation where ‘there is no money left’.

Government’s that restrict their everyday expenditure to comply with neo-liberal ideas about cutting the deficit and reducing the size of the National Debt, always run the risk of having to implement austerity policies, if their economies are affected by external events – a prolonged global recession, or a banking crisis.

The economic mess that Labour is likely to inherit if it won an election against the background of a Brexit calamity would inevitably require it to dramatically increase current spending simply to ensure that education and health provision are maintained at current levels. A ‘people’s quantitative easing’ where money went into social services would be key to this and should be restored to a central position in Labour’s agenda.