Although there are plenty of pointers, yesterday’s employment statistics didn’t  tell us very much about the real effects of the covid crisis on the labour market – and particularly the fate of young people, a new ‘Covid Generation’ It’s been predicted youth unemployment will rise by 600,000.

As with figures for unemployment across the population, the statistics for young workers show minimal changes. In particular, one would have expected the figures to reflect significant increases in the number of students losing part-time time work because of the closure of campuses as far back as March  and shut down of sectors like hospitality on which students depend;  but this is the result of  how the data is collected and the time span that’s covered. Stats for other European countries where less severe recessions are predicted, already indicate significant increases in youth joblessness.

What’s stunning in the UK, the number of  workers furloughed – some estimates put this at 9 million  (well over a quarter of the workforce).   In early May  it was calculated that over a million 19-25 were in this category – a significant proportion of these won’t be going back.  If unemployment has remained at less than 4% generally and remained at 10% for 19-24 year olds not in full-time education,  the number of claimants for employment related benefits has shot up to 3 million. 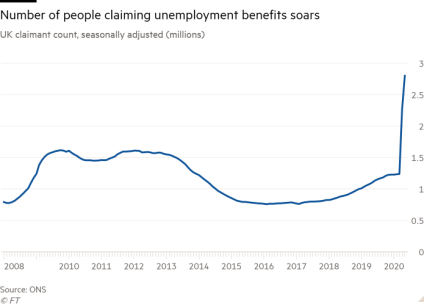 These are claims for universal credit,  including those on very low incomes (Job Seekers Allowance is being phased out) and could be the result of big falls in hours worked. Vacancies have also collapsed.  This is the lull before the storm.