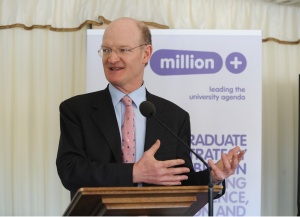 Estimates that 4 out of 10 student loans will never be repaid only confirms  The Great Reversal of education policy by Coalition education ministers Michael Gove and David Willetts.  The last thirty years have seen huge increases in participation in post compulsory education. Ironically some of the sharpest increases coming in the reactionary years of Mrs Thatcher’s governments –  staying on by 16 year olds increasing from 40% in 1980 and from 50% to 75% between 1985 and 1990. In the New Labour years that followed, applications for higher education increased from 450 000 to over 650 000

Expanding educational provision has continued to be justified in terms of new demands by international capital for a better educated workforce, a continuation of the education as  ‘human capital’  theme of the post-war years and exemplified best by Gordon Brown and Tony Blair’s promises  about globalisation  creating ‘more room at the top’. Like any other economic good, education was  reduced to commodity status.    Bought by the consumer to further their own advantage.

The reality has been rather different. Instead of up skilling and higher wages a period of ‘education without jobs’ and the emergence of a cohort of young people ‘overqualified and underemployed’ referred to in the media as a ‘lost generation.’ Thus arguments that the number of jobs in the UK requiring a degree has overtaken the number of jobs not needing any qualifications tell as more about the number of graduates available for hire as they do the changing technical requirements of particular jobs  http://www.bbc.co.uk/news/education-22268809.

The raising of university tuition fees to £9000 was supposed to  reduce student numbers – but in the absence of any real alternatives, despite government encouraging more young people to opt for ‘apprenticeships’, this has not happened to the extent that was predicted, with school and college leavers still opting for HE  www.radicaled.wordpress.com/category/higher-ed/.  It’s also the case that with the continued fall in graduate starting salaries and the general stagnation of incomes, many graduates (particularly those from non-elite universities) will barely reach the level  necessary to enable the full loan to be repaid.

Meanwhile, Michael Gove attempts to ratchet up opportunities for the ‘50%  not going to university’ by expropriating Ed Miliband’s Tech-Bacc, or at least its name – it will be largely a performance measure, a ‘mark of achievement’ rather than an actual award  www.independent.co.uk/news/education/education-news/techbacc-alternative-to-alevels-to-be-unveiled-8582086.html

Catering for the same students who would have been unlikely to have achieved the now discredited Ebacc and who would also have received a ‘Statement of (Non) Achievement’ it can never enjoy parity with A-level in the way that Gove insists. In fact it’s difficult to see how the thinking behind Gove’s latest initiative is any different from much of what’s come before, for example GNVQs accompanied by ‘key skills’ and then  the ill-fated Specialist Diplomas that included ‘functional skills’. Though level 3 vocational qualifications have continued to secure much higher labour market returns than the level 2 awards criticised in the Wolf Review, as more jobs become ‘graduatised’, those without degrees are bumped further down the jobs queue. Young people understand that while attending university still produces this type of premium then there’s no option but to apply.

4 thoughts on “As the Treasury recognises it’s ‘financially unsustainable’, will the university tuition fees ‘bubble’ burst?”